Objective(s)
Upon completion of this activity, the participant will be able to:
Read our blog post on this topic:  February 23, 2021
Summary: Colchicine for Coronary Artery Disease

The centuries-old anti-inflammatory drug colchicine (Colcrys, and others) is FDA-approved for prophylaxis and treatment of gout flares and for treatment of familial Mediterranean fever. It is also used off-label to treat pericarditis and pericardial pain after ablation for atrial fibrillation, and in recent years has been investigated for reduction of cardiovascular risk in patients with coronary artery disease (CAD).

MECHANISM OF ACTION — Inflammation is now thought to play an important role in atherosclerosis and the progression of coronary artery disease.1 Colchicine interferes with the activation of interleukin 1-β, inhibits β-tubulin polymerization, and prevents the activation and migration of neutrophils and their interaction with platelets.

CLINICAL STUDIES — ACS – A randomized, double-blind trial (COLCOT) compared a low dose of colchicine (0.5 mg once daily) to placebo, both added to standard therapy, in 4745 patients who had had a myocardial infarction within 30 days before enrollment. After a median follow-up of 22.6 months, a composite of cardiovascular death, resuscitated cardiac arrest, myocardial infarction, stroke, or urgent hospitalization for angina leading to coronary revascularization, the primary endpoint, occurred in 5.5% of patients treated with colchicine versus 7.1% of those who received placebo (HR 0.77; 95% CI 0.61 to 0.96; p=0.02).2

In a second randomized, double-blind trial (Australian COPS), 795 patients presenting with acute coronary syndrome (ACS) and evidence of CAD on coronary angiography were treated with a higher dose of colchicine (0.5 mg twice daily for the first month and once daily thereafter) or placebo and followed for at least 12 months. The primary endpoint was a composite of all-cause mortality, acute coronary syndrome, ischemia-driven urgent revascularization, and noncardioembolic ischemic stroke. At 365 days, a primary endpoint event had occurred in 24 patients treated with colchicine and in 38 who received placebo (HR 0.65; 95% CI 0.38-1.09; p=0.09). In a post hoc analysis of the composite endpoint substituting cardiovascular death for total death, the reduction in events with colchicine was statistically significant compared to placebo (5% vs 9.5%; HR 0.51; 95% CI 0.29-0.89; p=0.019).3

Stable CAD – In a randomized, double-blind trial (LoDoCo2), colchicine 0.5 mg once daily or placebo was added to standard therapy in 5522 patients with chronic coronary artery disease, as evidenced by coronary angiography, computed tomography angiography, or a coronary artery calcium score (Agatston score >400). Most patients (84.4%) had a history of acute coronary syndrome, but they were required to have been clinically stable for at least 6 months before enrollment. After a median follow-up of 28.6 months, a composite of cardiovascular death, nonprocedural myocardial infarction, ischemic stroke, or ischemia-driven coronary revascularization, the primary endpoint, occurred in 6.8% of colchicine-treated patients versus 9.2% of those who received placebo (HR 0.69; 95% CI 0.57 to 0.83; p<0.001).4

ADVERSE EFFECTS — GI adverse effects, including diarrhea, nausea, vomiting, and abdominal pain, are the most common effects of colchicine. These symptoms typically occur within days of starting treatment and are usually mild and transient. Myopathy has been reported; the risk may be increased with concomitant use of statins or other lipid-lowering drugs. Life-threatening toxicities, including blood dyscrasias and rhabdomyolysis, have been reported with therapeutic doses of colchicine. Patients with hepatic or renal impairment are at increased risk for adverse effects. Severe renal (CrCl <30 mL/min) and hepatic (Child-Pugh C) impairment have been associated with colchicine toxicity; dosage reductions may be required.

In all three clinical trials, the incidence of non-cardiovascular death was numerically higher in colchicine-treated patients; the differences between colchicine and placebo were not statistically significant, except in the Australian COPS trial (5 vs 0; p=0.024); 4 of the 5 deaths were from infection and 3 of the patients who died had discontinued colchicine during the first month of the trial.

PREGNANCY AND LACTATION — Although there are no adequate studies of the effects of colchicine in human pregnancy, observational data over several decades suggest that colchicine doses up to 2 mg daily are not associated with an increased risk for major birth defects, miscarriage, or adverse maternal or fetal outcomes. Colchicine is secreted into human breast milk; according to the label, no adverse effects were reported in 187 breastfed infants exposed to the drug. 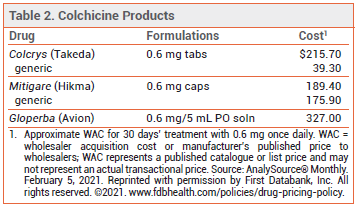 DRUG INTERACTIONS — Colchicine is a P-glycoprotein (P-gp) and CYP3A4 substrate. Concomitant use of P-gp and/or CYP3A4 inhibitors increases colchicine serum concentrations and the risk of adverse effects (see Table 3); the dosage of colchicine may need to be reduced. The drug is contraindicated in patients with renal or hepatic impairment who are taking P-gp or strong CYP3A4 inhibitors.5 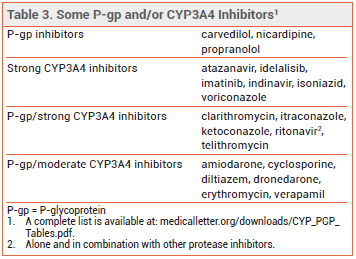 DOSAGE — The 0.5-mg formulation of colchicine used in the CAD clinical trials is not available in the US (see Table 2). The FDA-approved dosage ranges from 0.6 mg once or twice daily for prophylaxis of gout flares to 1.2-2.4 mg daily in one or two doses for treatment of familial Mediterranean fever.

CONCLUSION — Adding a low dose of colchicine (0.5 mg once daily) to standard therapy reduced cardiovascular risk in patients with coronary artery disease in two clinical trials and in a post hoc analysis from a third trial. Colchicine could be considered for inclusion in the regimens used to treat such patients.