Objective(s)
Upon completion of this activity, the participant will be able to:
Outline
Table 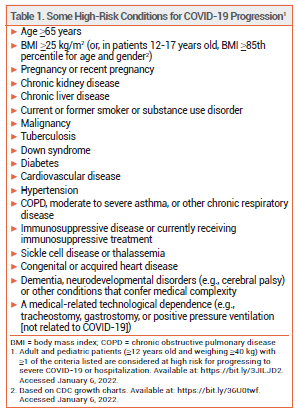 The investigational oral antiviral drug molnupiravir (Merck/Ridgeback Biotherapeutics) was granted an FDA Emergency Use Authorization (EUA) on December 23, 2021 for treatment of mild to moderate COVID-19 in outpatients ≥18 years old who are at high risk of progressing to severe disease, including hospitalization or death (see Table 1), and for whom alternative treatment options are not available or clinically appropriate.1 Paxlovid (Pfizer), nirmatrelvir copackaged with ritonavir, was granted an EUA on December 22, 2021.2 The IV antiviral drug remdesivir (Veklury) was approved by the FDA in 2020 for treatment of COVID-19 in hospitalized patients.3

CLINICAL STUDIES ― Issuance of the EUA for molnupiravir was based on the results of a randomized, double-blind, placebo-controlled trial (MOVe-OUT) in 1433 nonhospitalized, unvaccinated adults with mild to moderate COVID-19. Eligible participants had laboratory-confirmed SARS-CoV-2 infection (most commonly with the Delta variant) with symptom onset within 5 days of randomization and at least one risk factor associated with progression to severe disease. Molnupiravir 800 mg twice daily for 5 days decreased all-cause hospitalization or death through day 29 by 30% compared to placebo (6.8% vs 9.7%). There were 9 deaths in the placebo group versus 1 death in the molnupiravir group.4,5

In a trial (MOVe-IN) in hospitalized adults with COVID-19, there was no difference between molnupiravir and placebo in the time to sustained recovery.6

ADVERSE EFFECTS ― Rates of adverse effects such as diarrhea, nausea, and dizziness were similar with molnupiravir and placebo.

Potential risks of molnupiravir include embryofetal toxicity, impaired bone and cartilage growth (the drug is not recommended for use in patients <18 years old), and mutagenicity. Viral mutations theoretically could promote development of new SARS-CoV-2 variants.

DRUG INTERACTIONS ― No clinically significant drug interactions with molnupiravir have been identified. It is not metabolized by CYP450 isozymes and is only minimally excreted by the kidneys.

No data are available on the presence of molnupiravir or its metabolites in human breast milk or its effects on the breastfed infant or milk production. The drug was detected in the plasma of pups of lactating rats treated with molnupiravir. Women should not breastfeed during treatment with molnupiravir and for 4 days after the last dose.

VARIANTS ― The nucleoside analog metabolite of molnupiravir retains activity against the Alpha (B.1.1.7), Beta (B.1.351), Gamma (P.1), and Delta (B.1.617.2) variants in culture assays. According to the manufacturer, molnupiravir, based on its mechanism of action, should also be effective against the Omicron (B.1.1.529) variant.

DOSAGE AND ADMINISTRATION ― Molnupiravir is supplied in 200-mg capsules. The recommended dosage is 800 mg every 12 hours for 5 days. Treatment should be started within 5 days of symptom onset. If a dose is missed by more than 10 hours, it should be skipped and the next dose should be taken at the regularly scheduled time. Unlike Paxlovid, molnupiravir can be used in patients with severe renal or hepatic (Child-Pugh C) impairment.

CONCLUSION ― The FDA has issued an Emergency Use Authorization for the oral antiviral drug molnupiravir (Merck) for outpatient treatment of mild to moderate COVID-19 in certain high-risk adults. The drug should be started as soon as possible after diagnosis and within 5 days of symptom onset. In one trial, molnupiravir decreased all-cause hospitalization or death by 30% in outpatients with mild to moderate COVID-19. The drug should be reserved for nonpregnant, adult outpatients for whom alternative treatment options are not available or clinically appropriate. If Paxlovid is available, it should generally be tried first.

EMAIL THIS ARTICLE
Molnupiravir - An Oral Antiviral Drug for COVID-19
Published: January 24, 2022
...
© The Medical Letter, Inc. All Rights Reserved.
This article has been freely provided.