Objective(s)
Upon completion of this activity, the participant will be able to:
Outline
Table

Invega Hafyera (Janssen), a long-acting, extended-release (ER) formulation of the second-generation antipsychotic paliperidone palmitate, has been approved by the FDA for twice-yearly IM treatment of schizophrenia in adults who have been adequately treated with another injectable ER formulation of the drug (Invega Sustenna or Invega Trinza). It is the first drug to become available in the US for twice-yearly treatment of schizophrenia.

LONG-ACTING INJECTABLE ANTIPSYCHOTICS — Long-acting injectable antipsychotics are generally used in patients with a history of relapse due to poor adherence to oral maintenance therapy. They are believed to improve adherence, hospitalization and relapse rates, and long-term outcomes in patients with schizophrenia, even though a benefit has not been consistently demonstrated in controlled trials comparing long-acting injectable formulations with oral second-generation antipsychotics.1,2

CLINICAL STUDIES — FDA approval of Invega Hafyera was based on the results of an unpublished (summarized in the package insert) double-blind, active-controlled, noninferiority trial in 702 adults with schizophrenia. At 12 months, a relapse event occurred in 7.5% of patients who received Invega Hafyera every 6 months and in 4.9% of those who received the drug every 3 months (Invega Trinza); twice-yearly paliperidone was noninferior to the drug given every 3 months.

ADVERSE EFFECTS — Adverse effects of the new twice-yearly paliperidone palmitate formulation appear to be similar to those with the other injectable ER formulations of the drug.

DRUG INTERACTIONS — Concurrent use of strong CYP3A4 and P-glycoprotein (P-gp) inducers can decrease serum concentrations of paliperidone and should be avoided; if coadministration is necessary, oral paliperidone extended-release tablets can be added.3 Paliperidone may antagonize the effects of levodopa and other dopamine agonists. 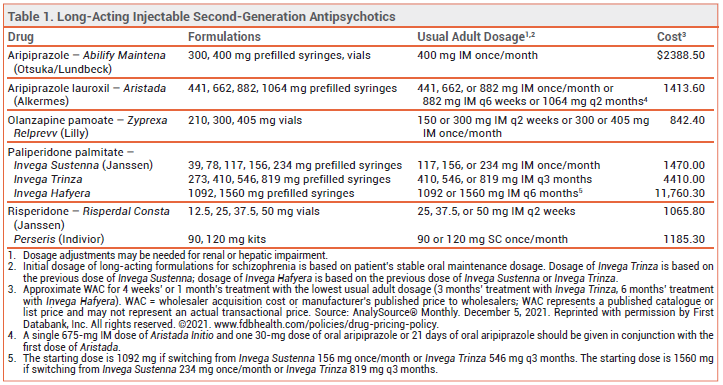 DOSAGE AND ADMINISTRATION — Invega Hafyera is injected into the gluteal muscle once every 6 months. The starting dosage (1092 or 1560 mg) is based on the previous dose of the monthly or 3-month injectable ER formulations of paliperidone palmitate and should be administered at the time the next dose of paliperidone palmitate is scheduled. Dosage adjustments can be made every 6 months between 1092 mg and 1560 mg. Invega Hafyera is not recommended for use in patients with any degree of renal impairment (CrCl <90 mL/min).

EMAIL THIS ARTICLE
In Brief: Twice-Yearly Paliperidone (Invega Hafyera) for Schizophrenia
Published: January 10, 2022
...
© The Medical Letter, Inc. All Rights Reserved.
This article has been freely provided.